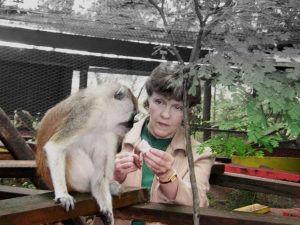 International Primate Rescue started life as the Marmoset Welfare Foundation in March 1996 in Polokwane, South Africa, where founder Sue Mousley had been caring for primates since 1990. Fascinated by the strange and unstable behaviour patterns of a Common Marmoset monkey named “Meggie”, she was prompted to study behavioural problems and other disorders in captive and/or orphaned nonhuman primates.

The sanctuary, the first of its kind in South Africa, received its first monkey, an eight-month old Common Marmoset named “Cheeky”, in April 1996. After a report on national TV in South Africa, the sanctuary was inundated with requests to receive problem monkeys. In 1998, the sanctuary was offered a very disturbed Bolivian Squirrel monkey, and 15 month old Bobby, who is still a resident at the sanctuary, became the first primate other than a Marmoset to be cared for at the International Primate Rescue. By September 2001 Sue and the primates were obliged to relocate to a larger property in order to accommodate the swelling numbers of primates in need. In Israel; Iris, a Patas monkey became the first international rescue case and was flown from Israel to the sanctuary in South Africa in February 2002. The rescue was widely reported, and IPR has since received numerous requests to assist in international rescues. The sanctuary has since received primates in need from as far afield as Mali, Germany, Hungary and Israel.

The sanctuary, which relocated from Polokwane to Pretoria, South Africa in 2010 currently cares for over 100 primates, including Marmosets, Tamarins, Capuchins, Macaques, Squirrel Monkeys, Mona Monkeys, Patas Monkeys and Grey Mouse Lemurs. Many are hand reared ex-pets who arrive with behavioural problems and require rehabilitation from psychological disorders. The sanctuary houses exotic primates, who are unable to be returned to the wild, and therefore our time and focus is aimed at ensuring all enclosures are as suitable and comfortable for each individual as possible. The demand for this service is growing relentlessly; we receive a constant stream of requests to rescue homeless primates in South Africa and abroad. Through this, the sanctuary is expanding on a daily basis in order to keep up with the demand.

Our mission at IPR is to relieve the suffering of unwanted primates and to provide the best possible standard of care at our sanctuary. At IPR, we also strive to discourage, provide help, awareness and educate people that wish to, or already own a primate. Our target is to develop a near wild experience for our primates and eventually make the facilities available to help any apes in need within the future.